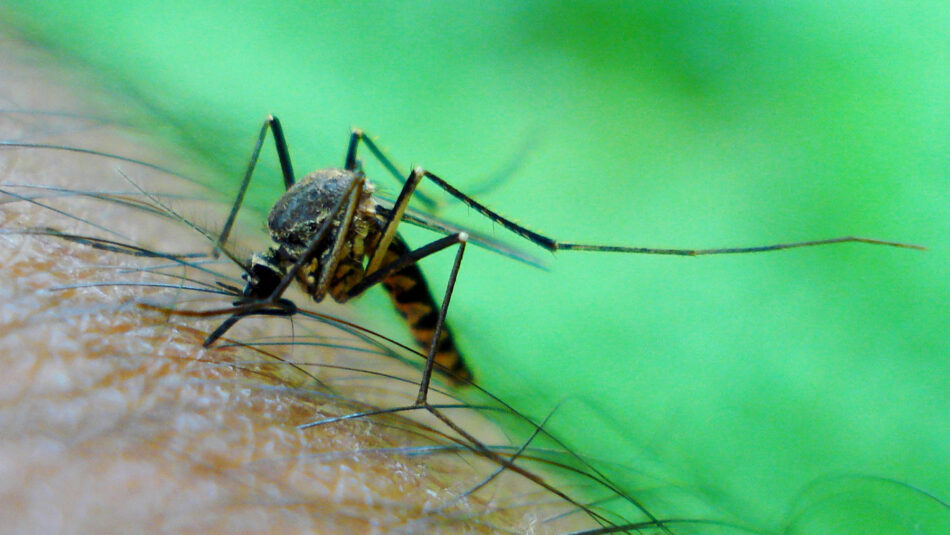 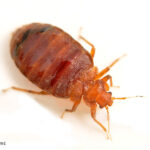 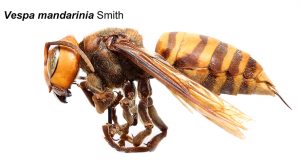 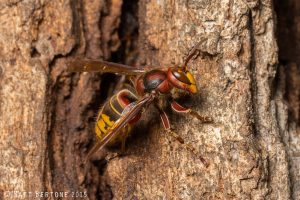 Rain across many areas of North Carolina over the next few days followed by warmer temperatures will likely bring about a surge in termite swarm begin. Most termites in a colony are wingless.  However, at this time of year, we see a new batch of winged reproductives (future queen and king termites) who will build new colonies (See Termite Swarmers – What Do They Mean for You?).  Aside from having wings, swarmers look different from the colony’s worker termites which are wingless and white in color.  Swarmers are dark in color and more resemble what many people call “flying ants” (which is a generic term for the reproductives of any number of ant species). The easiest way to distinguish winged termites from winged ants is that ants have a “thin waist” similar to wasps. 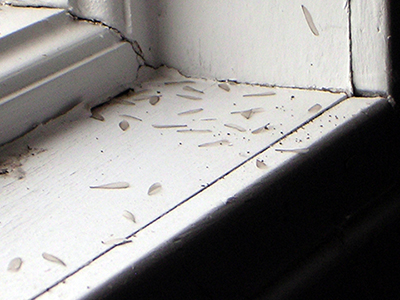 Termites typically swarm during the daytime and often after rains. They appear suddenly and may be around for a few hours and then suddenly disappear. Very often, the only sign of their activity are their shed wings scattered about the area (as seen in the image here).  If swarmers are seen outdoors, take it as nature’s way of reminding you that termites live all around us. HOWEVER, that does not necessarily mean that they’re invading our homes. The solution? Take the hint and consider contacting a pest management professional to inspect your home to look for any other sign of termite activity. This can be particularly helpful if your home has not been treated or inspected for more than 8-10 years. If termites swarm inside your home, this more likely means that you’re hosting a family of several thousand termites. If you have a termite contract, contact the pest management company immediately and arrange for an inspection. If you don’t have a contract, it is best to contact 2-3 companies and have them inspect your home and give you an assessment of any problems and how they propose treating it.

With termites, a “do-it-yourself” approach is probably not a good choice. Termite treatments include the use of a liquid insecticide applied to the soil and/or the use of an in-ground termite baiting system. The choice of treatment may be a matter of your preference or dictated somewhat by the type of construction of your house (e.g., crawlspace, slab or basement) and other factors such as foundation drains or encapsulated crawlspaces. We don’t recommend one type of treatment over another. The best piece of advice we can give you is to take your time and compare the treatment proposals in terms of the method of treatment, the cost of the treatment, and the terms of the warranty that the company provides. Most contracts are renewed annually and come with an annual fee of $125 – $350 (depending on the type of treatment you have). Termites are not going to cause significant damage in the 7-14 days that you might use to make your decision on how best to protect your home and.  In many cases, the company may have to schedule you 1-2 weeks out anyway as they get busier at this time of year.

The following was cross-posted from the Extension Entomology website.

In spite of our continued warm weather, several of our typical cool-weather pests have begun their fall invasion of homes and commercial buildings.  This is actually not surprising since this move to seek overwintering sites is due not just to temperature but also the shortening day-length and decline in suitable food plants. 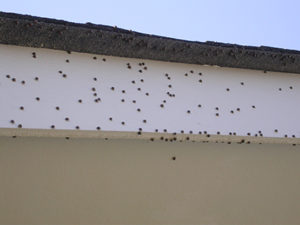 Kudzu bugs aggregating on the fascia board of a house. (Dan Suiter – University of Georgia)

Kudzu bugs are moving out of kudzu and soybean fields and flying to nearby structures, particularly those with light-colored siding (as seen in the figure to the right).  As many people discover, spraying siding, window trim, etc. is likely to produce mediocre results even if repeated sprays are applied.  Many of the labels for the pyrethoid pesticides (those containing chemicals such as lamda-cyhalothin, cyfluthrin, bifenthrin, etc.) also limit their application to vertical areas above impervious surfaces (such as driveways, sidewalks, patios) where rain could wash the chemical off the treated surfaces and allow them to run off into storm drains.  We have additional information at: 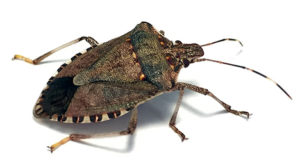 Brown Marmorated Stink Bugs (BSMB) are also making their presence known across the state, particularly in the Piedmont, Foothills, and western NC.  This pest causes significant damage to a wide variety of fruit, vegetable and row crops as well as ornamentals.  Although control is possible for these crops, preventing the stink bug’s invasion of homes is difficult.  As with kudzu bugs, surface sprays to building exteriors or around windows and doors is rarely effective.

For more information about BMSB, visit: 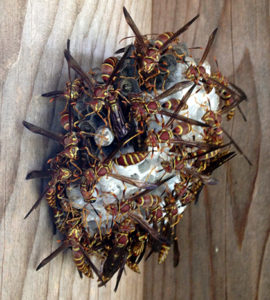 Paper Wasps (Polistes sp.) colonies reached their peak size a few weeks ago with the production of next year’s queens and are now starting to disperse.  Although the workers and this year’s queen will die over the next few weeks, some workers along with next year’s queens will abandon their nests and look for overwintering sites.  This activity often results in wasps finding gaps near chimneys or roof ridge vents or windows and doors and then showing up indoors.  Many people assume that there is an active nest inside a wall or some other hidden area (e.g., attached to the underside of a deck).

However, the wasps could also be coming from nests out in storage buildings, tree holes, firewood piles, old unused cars, or other items that have been undisturbed for much of the summer.  Spraying the exterior of the building (not spraying a specific nest) is not going to keep this activity which will continue until we see cold (frost).  Even then, warm winter days may cause the wasps to become active.  Bear in mind that there is not a functioning nest and so the wasps are not aggressively defending a nest. However, if you step on one or swat at one, it may sting in defense..

We have more information at: Controlling Paper Wasps in and Around Structures