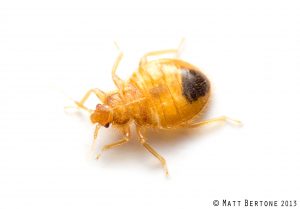 As their common name implies, the primary host of bat bugs (Cimex adjunctus) is bats. Occasionally, however, they will feed on humans if their preferred host is not available. As with the human bed bug (Cimex lectularius), bat bugs have not been shown to transmit any disease-causing pathogens to humans. However, bites from both bed bugs and bat bugs can cause insomnia, anxiety and stress to many individuals.

Bat bugs are often confused with bed bugs. Thus, it is important to be familiar with the identification, biology and management of these bugs. Since bat bugs treatments differ from treatments for bed bugs, correct identification is critical for success.

Bat bugs and bed bugs look nearly identical to the naked eye. A stereoscope or USB digital microscope with magnification between 20x and 50x is needed to distinguish between the two species. One distinguishing feature is that the fringe hairs on the pronotum (the area directly behind the head) of the bat bug are as long or longer than the width of the eye, but are shorter in the bed bug. In addition, the front edge of the pronotum of the bat bug is slightly concave, while the bed bug’s pronotum will be more deeply concave (see photo below). 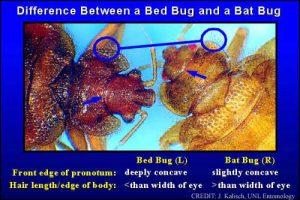 Bed bugs and bat bugs have different habits. As mentioned previously, the primary hosts of bat bugs are a variety of bat species, many of which roost in colonies. However, in the absence of bats, bat bugs can feed on other warm-blooded animals, including humans. Bat bugs are often encountered inside a structure when bats are established indoors – usually in attics, wall voids, unused chimneys, or other similar places. Typically, bat bugs are found in cracks and crevices wherever the bats are  roosting. However, if the primary hosts (bats) leave the nesting area, die or are removed/excluded, bat bugs begin moving inside a structure within one to four weeks to feed on alternative hosts. Once they are set up in living spaces and have found a host on which to live, bat bugs will become established the same way as bed bugs. They will hide in mattresses and box springs, bed frames and other places where the host spends most of its time at night. 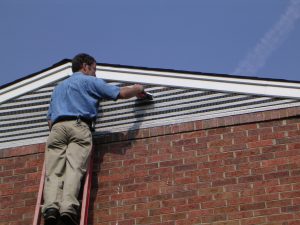 To eliminate bat bugs, bats must first be excluded or removed from the building (see photo at right). Once bats are excluded or removed, thorough crack-and-crevice and spot treatments of residual insecticides to all bat roosting areas are necessary. Dust formulations work very well against both bat and bed bugs and can be helpful in places where drift to non-target areas is not an issue. Pay particular attention to areas around objects leading indoors, such as light fixtures, vents, plumbing chases and chimneys. These treatments are critical to kill bat bugs that will begin moving to living places after losing their host.

If you see what appears to be bed bugs crawling down a chimney or from an attic, or in another atypical location for bed bugs, identify and confirm the species as quickly as possible. Once you have a positive ID, treatment should be scheduled as soon as possible because as with bed bugs, a moderate infestation can develop in a short amount of time. Finally, make sure to your customer is aware of what the treatment will entail and how long it may take to eliminate all the bat bugs. It is not unusual to see bat bugs showing up in living places for several weeks after treatment before they are gone for good.